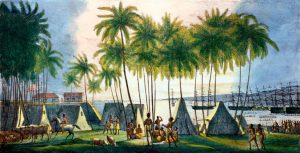 Moana, Ukeleles, tiki-bars, that place where Obama came from, and the spot that inspired that godawful Bay movie… That’s the long and short of what Jane and Dick America know of Hawaii. Sure there are the beaches and hotels, and the crazed honeymooners blowing all their dough, but as a whole, the island chains are still shrouded in mystic. Heres’ a quick crash course on Hawaii before we start to point out the spooky bits in this top ten haunted spots in Honolulu piece.

The Hawaiian Islands are a series of archipelago of eight major islands, several atolls, numerous smaller islets, and seamounts in the North Pacific Ocean. The whole daisy chains of islands extend about 1,500 miles. Originally, because this is the sort of tidbit that’s too good not to write down, the whole formation was called Sandwich Islands. Why? Well, and I’m not joking here, because of the Earl of Sandwich. The islands, up until, 1840, were named in honor of John Montagu, 4th Earl of Sandwich. The present designation is derived from the name of the largest island, Hawaiʻi Island.

Oh, and it’s one of the richest culturally heavy states in the Nation. A state with its own belief system and traditions. A state mired in mythology, superstition, and more boogeymen per square inch than on a Nightmare Before Christmas.

A BIG CLARIFICATION, just so we’re on the same page when I say Honolulu I mean on the island of Oahu. Honolulu is just a city found in that archipelago… BUT the archipelago is considered the county of Honolulu, so, in the strictest sense of the word, the nomenclature fits.

Moans, scary sounds, macabre visions, weird lights, and, well, just about anything that would get a fringe scientist’s heart racing, Iolani Palace is the go-to place if you want an excuse to change your underwear. The placest pressure-cooked by all manner of supernatural fisticuffs.

Constructed in 1882, the palace was once home to Hawaii’s last ruling royalty, King Kalakaua and his sister Queen Liliuokalani.

Queen Liliuokalani passed away in 1917, but it is said that her spirit still roams the halls of the stately home.

In 1948 two escaped felons, James Majors and John Palikiko butchered 68-year-old widow Therese Wilder on Morgan’s Corner. Wilder was tied, hammered, and smothered in her bed. It became a nationwide event and the yellow rags went hog-wild with the “Murder in Paradise” angle… they ran with it.

Morgan’s Corner is now abandoned and not a single remains. At night the unexplained stories surrounding this place come alive and leap at passerby’s throats. Turn your hair white apparitions; unexplained sounds; spine-tingling screams; the perpetual feeling of someone cutting the rug on your grave.

Natives believe that Wilder never left… and that her two malefactors, those knaves, also haunt the area.

In 1795, King Kamehameha, Chief of the Big Island at the time, tried to combine the islands by declaring war against the chief of Oahu, Chief Kalanikupule. This was a historic event and one of the most bloody periods in Hawaiian history.

Mid-skirmish, King Kamehameha troops, having invaded Oahu, start pushing hard the flanks of Kalanikupule’s dwindling army. It comes down to mano a mano action, but Kalanikupule’s warriors are simply overwhelmed. The battle continues, the invading army closes ranks and forces the beleaguered soldiers to choose their fate; die by their hands of by theirs. Kalanikupule’s warriors, more than 400, jump off the edge of Pali to their deaths. The bones of the combatants are said to still be on the floor of the cliff.

Visitors have stated that at night you can hear the howls, cries, and desperate bellows of the fallen warriors. Reports of shadowy figures abound and the area is said to be cursed. Pali Lookout is one of the many spots where the infamous Nightmarchers travel through and to the natives a no-fly zone on certain evenings.

During the day the Pali Lookout is frequented by visitors for its panoramic view of East Oahu. But by night, it has been told that you can hear the howling and crying of the fallen warriors. There have also been several reports of shadowy figures seen in the area — but you can pay it a visit to see for yourself.

It was going to happen, we were going to talk about Pearl Harbor. You all know that story; On December 7, 1941, thousands of officers lost their lives when Pearl Harbor was attacked. It more or less tossed teh Yanks into the fracas that was World War II. Hangars 37 and 79 were miraculously left standing by the attack. In 2006 they were converted into the Pacific Aviation Museum… And it’s full of ghosts.

The place is up to its earlobes in spooks. Toss a rock and it’s come back, showered in ectoplasm, and boinged you on the head. In 2012 the museum became an episode of ‘Ghost Hunters’. Unidentified sounds and lights were recorded during the show’s investigation.

This popular hiking trail is popular for its surplus of greenery and cascading waterfalls. It’s one of the easiest hiking trails on the island and most visitors can breeze through it at an easy pace and in less than an hour.

During the day it’s quaint, heavenly, peaceful… At night the path is nothing short of the third unproduced movie of IT. It’s claw your eyes Blair Witch Project spooky. Full of ghosts, monsters, and even Hawaiia’s uber zombies, The Night Marchers.

5. The Ancient Heiau – Temple – of Ulupo

Right on the edge of the Kawaianui marsh close to Kailua town on the Windward side of Oahu.

The temple is supposed to be somewhere between 400 to 800 years old. Stories state that the Menehune, Hawaii’s take on elves, built the place. Today this is an active spot of worship and considered one of the most sacred shrines to the god Lono (deity of agriculture, peace, and renewal).

But, and here’s the kicker, during its time the temple didn’t worship Lono but Kuka’ilimoku (the god of war). Part of the rituals of worshiping a blood-drenched war god was the fact that said god had a certain died to maintain… the deity loved his human sacrifices. Some say that the bones of tens of thousands are interred within the walls of the Heiau… and they are not at all pleased at being a god’s Happy Meal.

One more Pearl Harbor spot. Yes, I know, but this one is too good to resist. Ford Island is found at the center of the harbor. The place, although rumored to be haunted by the slain soldiers of that surprise attack, is known by the natives and feared on account of something even more terrifying than specter soldiers… a HUGE powerful shark god.

That’s right, there is an underwater cave that is said to be the home of Jason Statham’s sparring partner in MEG.

The place of an important battle in Hawaiian history. The viaduct that crosses the gorge has been the site of various head-on freak accidents.

The ditch is also said to be one of those pesky Nightmarchers. And, if that wasn’t enough, the area underneath the bridge is supposed to be the hunting ground of a feared shapeshifter similar to the Native American Skinwalker.

This is where the Hawaiian sovereignty from the current Hawaiian Monarchy is laid to rest. They have a habit of walking beside visitors during the day and frequenting a rather majestic tree outside its halls for nighly lūʻaus and scarring the night guards into a stupor.

The Garden first began out as a playground in the 1920s. In 1957, it was formally inaugurated as a botanical garden. Local legend has it that the area is haunted by the Green Lady;

a jagged tooth, hair covered in seaweed, and fish-like scales crone that has a habit of kidnapping the innocent.