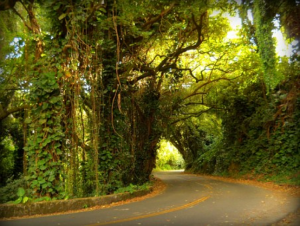 The city of Honolulu is known for its unparalleled views of the natural world. Of these views, Nu’uanu Pali Drive offers the most beautiful. With an elevation of over 1,000 feet, the winding road cutting through the cliff face provides a stunning panorama of the lush green forests and glittering beaches below. But according to many, Nu’uanu Pali is also home to some of the most fearsome spirits in all of Hawaii. Think you’re brave enough to venture down haunted Nu’uanu Pali Drive? Read on to find out!

The history of Nu’uanu Pali is as long and winding as the path itself, stretching all the way back into ancient times. The passage is low and easily traversable, making it the perfect connection between one side of the Ko’olau mountain range to the other. The passability of the road attracted ancient settlers into the area, who formed their homes there for thousands of years.

In 1795, the area became the site of one of the bloodiest battles in the island’s history, the Battle of Nu’uanu. The fight was the final and most brutal battle in Kamehameha I’s struggle to unify the Hawaiian islands. Desperate for victory, Kamehameha’s men drove opposing forces over the edge of a steep cliff to their deaths. A total of 400 warriors lost their lives on the rocks below.

By 1845, the first road was constructed, connecting the Oahu area with the city of Honolulu. In the 1890s, construction workers further developing the road uncovered around 800 human skulls from the Nu’uanu Valley, widely believed to be the warriors who met their end in the battle of Nu’uanu. In 1959, this road was replaced with the Pali Highway and the Nu’uanu Pali Tunnels, massive modern highways still in place today. The area also houses hiking trails and the crumbling site of the original mountain pass.

The stunning tropical beauty of Nu’uanu Pali Drive conceals some of the darkest and altogether strangest tales in all of Honolulu. The most contemporary of these involves the tortured spirit of a teenage girl, Cassie, who tragically committed suicide at the end of the road. According to the story, Cassie spiraled into a deep desolation after her boyfriend cheated on her with a cheerleader in their class. Unable to cope with the pain, Cassie hung herself from a tree off Nu’uanu Pali Drive.

After Cassie failed to return home on the evening of her death, her family immediately filed a missing persons report. For days on end, her friends and family waited in a suspended state of anxiety, holding out for any news on what had happened become of her. After three days, the body was discovered. Ironically enough, it was Cassie’s former boyfriend and his new sweetheart who did the discovering.

Aside from being Cassie’s final resting place, Nu’uanu Pali Drive was also a popular necking spot for young lovers. The two had just pulled their car down the drive when out of nowhere, the girl let out a bloodcurdling scream. Her boyfriend turned to look out of the passenger window, only to see the bloodless severed head of Cassie, grinning up at them.

The coroner’s report from that fateful night states that Cassie’s body had been left to hang from the tree for so long that the rope had snapped, severing her head from her body. The head then happened to land right outside the window of her ex-boyfriend’s car. Was it a coincidence, or was it Cassie’s own special brand of revenge? Nothing is certain, but the story doesn’t end there.

Due to the severe trauma to Cassie’s spinal cord, her head and body would never again reunite. Her family naturally opted for a close casket funeral, and their daughter was laid to rest in pieces. Because of the fragmented nature of her body, and the tragic, violent nature of her death, Cassie’s spirit is rumored to perpetually wander down Nu’uanu Pali Drive, dragging her severed head behind her by her own spinal cord. She has a particular affinity for couples necking in their cars at night, and is said to materialize right outside their passenger side windows. Perhaps she’s jealous she can no longer participate.

But Cassie is far from the only spirit to prowl down Nu’uanu Pali Drive. According to Hawaiian folklore, two large boulders just off the road once housed a pair of guardian goddesses who watched over and protected the area. To Native Hawaiian communities, the goddesses possessed an extraordinary amount of power. The scope of this power was even thought to extend beyond the reaches of Nu’uanu Pali. Families would hike out to the rocks and leave offerings of flowers or bark cloth to ensure safe travels. New parents would also travel to the rocks to bury the umbilical cords of their newborn babies, ensuring they would be protected from evil forces. Infants whose umbilical cords were buried here were said to live long, healthy, and prosperous lives.

The second pair of Hawaiian gods known to lurk near Nu’uanu Pali Drive enjoy a slightly less amicable relationship. Legend holds that Pele, the goddess of the volcano, and Kamapua’a, a half-man, half-pig god, have some serious beef, or should it be pork? According to the stories, Pele holds a perpetual grudge against Kamapua’a, and forbids him from crossing into her territory in any of his forms, pork chops included. Ask any Native Hawaiian, and they’re sure to tell you to leave all your ham, spam, and tenderloins at home when driving down Nu’uanu Pali Drive, especially at night.

Those who defy Pele’s will are said to suffer the consequences, and many have claimed that whatever pig products they dared bring into Nu’uanu instantaneously burst into flames before they could reach the other side. One visitor to the area even claims his favorite mug, a white porcelain one decorated with tiny pink piglets, suddenly became red-hot to the touch before shattering into a million pieces. When he bent to pick up the pieces, not a single piglet remained intact. The man decided it would be best to glue his beloved mug back together once he was safely outside the vengeful goddess’s territory.

The final and perhaps most terrifying tale to come out of Nu’uanu Pali is that of the mo’o wahine, a grotesque lizard-like creature with the ability to transform into a beautiful woman. One traveler recounts an especially cold-blooded encounter with this creature. According to his report, the man was walking down the Nu’uanu trail at dusk. He was making his way through the trail when a woman passed him coming the other way. The man described her as the most beautiful woman he had ever seen. She smiled at him before continuing down the trail and he turned to get a second look, enchanted. The man then continued on his way, but he couldn’t get the woman out of his head.

By the time he reached the end of the trail, night had fallen. He stepped into an open clearing full of flowers and was shocked to see the same woman from before standing in the moonlight. He moved closer to try and talk to her, but she winked at him and beckoned for him to follow her instead. Utterly mesmerized, the man had no choice but to obey. He followed the woman blindly down the dark path, completely unaware of where his feet were taking him. All at once, he found himself at the precipice of a tall cliff, with the woman nowhere in sight.

Out of nowhere, he felt something rush at him from behind, nearly pushing him off the edge. When he scrambled to his feet, he swears he could see the retreating figure of a hulking serpentine beast, its scales glittering in the moonlight. The man considers himself lucky to get away with his life and has vowed never to return to Nu’uanu Pali Drive again. He concedes that if he sees the woman again, he’ll probably just ask for her number instead.

There’s no doubt Nu’uanu Pali Drive offers some of the island’s most stunning views, as well as some of its most treacherous trails. The lush green landscapes, crumbling historic roads, and exotic wildlife are just as likely to take your breath away as the warring gods, headless ghosts, and lizard women in disguise. The hike is also a long and winding one, full of big rocks and steep inclines, so be sure to bring a snack. Just remember to leave the bacon at home.