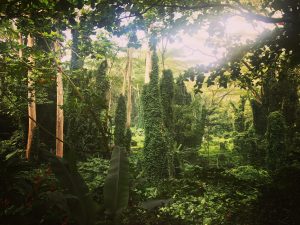 The city of Honolulu on the island of Oahu, Hawaii, remains one of the most popular vacation spots in the world, and for good reason. The islands are picture-perfect, with gorgeous white sand beaches and lush tropical landscapes. Oahu Island in particular offers stunning hiking destinations hikers can enjoy all year round, thanks to Hawaii’s warm tropical climate.

Manoa Falls Trail is one of its most popular, a 1.6-mile trail with a stunning view of the falls at its end. The trail has also served as a filming location for scenes in both Jurassic Park and Catching Fire, and you can catch it on TV in Lost and Hawaii Five-0.

But if you find yourself on the lovely island of Oahu and decide to take a hike to Manoa Falls, remember to keep your eyes peeled. The trail is said to be traversed by a spectral army know as the Night Marchers. The ghosts of unlucky hikers who have plummeted from the cliffs are also rumored to linger here. Think you’re ready to hike the ultra-haunted Manoa Falls Trail? Read on to find out!

Before it was a popular hiking spot, Hawaiian natives first cleared the trail hundreds of years ago and used the area to bathe, hunt, and gather wood. Earlier Hawaiian civilizations lived entirely off the land, using wood they collected to craft canoes and bark from the trees to make their shoes. They even harvested sap to make laxatives.

Today, the trail is the second-most visited hike in Honolulu, popular with both tourists and locals alike. The Lyon Arboretum at the base of the trail also serves as a conservation center for endangered Oahu plants and wildlife, making it a great research spot for students at the University of Hawaii. But the trail is also of interest to students of a more paranormal persuasion. Ghost hunters from all over the country travel to the haunted Manoa Falls Trail, looking to catch a glimpse of the legendary Night Marchers.

Also known as the Phantom Marchers, the Night Marchers are said to be the spirits of ancient Hawaiian warriors. The warriors are rumored to lurk within the lush greenery of Manoa Falls after dark, as their name suggests. Tourists happily embarking along the trail are usually unaware of what lies in wait, but ask any Honolulu native and they’re sure to list the tell-tale signs of their arrival. First comes the distant, echoing cry of a conch shell, then the steady, rhythmic beating of drums.

At first, the blare of the conch shell sounds far away, so imperceptible that you question whether you heard anything at all. The drums start out low and soft, nearly blending in with the noise from the falls. But then they begin to rise. The sound becomes closer and closer, the drums beating harder and faster until suddenly the noise of them is deafening. And then the conch shell sounds again, this time so loud it leaves a ringing in your ears. That’s when the torches appear. Blazes of light suspended from heavy wooden staffs, all marching in a uniform line through the trees.

Locals warn those who come across them to do the following: get down as low to the ground as you can, lay flat on your stomach, and most importantly, do not meet the gaze of the marchers as they pass. Instead, play dead out of respect for the undead. If you do these three things, the band of ancient warriors will leave you alone and pass by peacefully.

The Night Marchers, or hukai po as they’re referred to by Natives, are described as wearing heavy armor, and carrying long pointed spears and other weapons along with their ghostly torches. According to legend, the Night Marchers guard the ghosts of ancient Hawaiian royalty or even island gods. At the center of their ranks, some hikers report seeing a kingly figure wearing a crown, held high above the heads of the other ghosts. Either way, the spectral ranks of the hukai po pass by with a beating of drums, and leave nothing behind but a trail of footprints.

If you take an evening hike down to the falls and hear the steady beating of drums in the distance, don’t be afraid. The warriors, although terrifying and imposing, are actually said to be protectors of the island rather than vengeful spirits. Just be sure not to look them in the eye!

Even more Haunted Hikes in the U.S.

Death at the Falls

Although widely considered an ‘easy’ hike because of its short length, the Manoa Falls Trail still poses a number of threats to the unsuspecting hiker. To begin with, the closer you get to the falls, the wetter the path becomes, greatly increasing the risk of slipping. Flash floods are also common in the area. Worst of all, swimming around the falls is strongly discouraged due to the risk of Leptospirosis, a nasty blood infection caused by the bacteria Leptospira.

Aside from Leptospira, the muddy, slippery paths have caused a number of hikers to lose their footing over the years, several of which did not survive the fall. And struggling to find a safe place to step among the wet, perilous rocks, it’s easy to see why.

In 2012, a young man named Philip S. Mann traveled to Honolulu from Florida on a solo vacation. Eager and excited to see what the island had to offer, Philip set out toward the falls on the evening of April 12th. Later that same evening, other hikers heard his cries of distress, but when search parties were dispatched to find him, they turned up empty. It wasn’t until the next morning that a group of hikers making their way down the path discovered his body in the riverbed. Investigations conclude that he most likely died on impact.

Philip isn’t the only hiker to meet his end at Manao Falls. In June of 2016, 19-year-old Kristi Takanishi returned to her hometown of Honolulu for summer vacation. She graduated as valedictorian at her high school and was studying premed at the University of Washington. On June 15th, Kristi went on a hike to see the falls with a friend. The two were taking pictures along the edge of the cliff when Kristi lost her balance on the slippery rocks and fell 200 feet. Firefighters at the scene reported that Kristi died of blunt force trauma to the head.

Thousands of people hike along the falls of Manoa every year, and every year without fail reports flood in of encounters with the other side. Some hikers report hearing eerie, banshee-like screaming echoing through the falls, believed to be the war cry of the hukai po.

Another report comes from a group of local teenagers. One night, the friends decided to sneak out and drink beer by the falls after the trail had officially closed. Sounds of laughter and beer tabs popping open punctuated the night as they sat by the water, almost drowning out the spectral, ancient beating of drums. But not quite. One of the teenagers perked up at the distant sound. He asked his friends if could hear anything, but they just laughed and told him he was being paranoid. Then the drums began to grow louder, and louder. Beginning to feel uneasy, one of them suggested that maybe it was time they head back.

Then they heard the low, unmistakable sound of the conch shell. Terrified, all of them leaped up and high-tailed it away from the falls as fast as they could. As they rushed down the path, they could see the light from the warriors’ torches lighting up the night, and could just make out the faint outline of human figures moving toward them. As they ran, one of the teenagers swore he spotted the tattered, bloody figures of two hikers reaching out to them, one male and one female. Whether it was real or imagined, the group of teens made sure never to trespass at Manoa Falls ever again!

The beautiful islands of Hawaii are home to some of the most beautiful beaches and scenic views in the country. It’s no surprise that Manoa Falls, with 150 feet of cascading water and vibrant tropical wildlife, is among its most popular. But considering the horrific falls and the army of undead soldiers that reportedly lurk here, there’s no wonder it’s also one of the most haunted hikes on the island.

Nature lovers and paranormal enthusiasts alike are sure to enjoy the hike, and if you’re lucky enough to find yourself in Honolulu, be sure to make time for the Manoa Falls trail. Just remember to stop, drop, and play dead if you happen to hear the beating of ancient tribal drums. Oh, and try not to swim in the water.