Hawaii may be the youngest state of the 50, but the islands themselves have a history dating back long before they officially joined the union in 1959. The Hawaiian islands are a beautiful tropical paradise teeming with life, culture, and history. And though it may be easy to forget this history while standing on its beaches or in the lobby of one of its luxury oceanfront resorts, the city of Honolulu is peppered with reminders.

One such reminder is the Bernice Pauahi Bishop Museum, a museum of natural and cultural history located in Honolulu’s historic Kalihi district. Tourists and locals alike enjoy perusing the exhibits about the island’s rich history, but the Bishop may have more to offer than just the artifacts behind its glass and the plaques hanging on walls. Many believe the ghosts of Hawaii’s past linger behind, perhaps looking to give tourists their money’s worth of island history. If you think you’re brave enough to experience this history firsthand, read on.

Before it was a museum, the Bishop was actually the boys’ dorm of the Kamehameha School, an institution founded to further the lives and education of native Hawaiian children. In 1889, the school’s co-founder, well-respected philanthropist and businessman Charles Reed Bishop built the museum in memory of his late wife Princess Bernice Pauahi Bishop. The princess was born into the royal family and died the last legal heir of the Kamehameha Dynasty, which ruled over Hawaii until 1872. Devastated by the loss of his wife, Charles Reed set out to find a way to immortalize her.

In his original conception of it, the Bishop Museum was intended as a home for the family heirlooms of his late wife’s royal bloodline. In this way, the museum became a memorial to the lineage of the Kamehameha Dynasty, Hawaiian history, and most importantly, to the memory of his beloved wife Bernice. Since it first opened its doors to the public in 1891, the Bishop has far exceeded its original objective. Today, it is the largest museum in the state and remains the most established institution of both natural and cultural history. The Bishop has also achieved worldwide recognition for its impressive collections, ambitious research projects, and public education programs embodying the original spirit of the Kamehameha School.

Lastly, the Bishop contains one of the world’s most expansive collections of books, newspapers, and periodicals on the topic of Hawaii and the South Pacific. The collection of over 50,000 volumes includes books on both Hawaii’s natural history—anthropology, botany, zoology, and entomology, as well as its cultural history—diaries, memories, and other narratives on 18th and 19th-century Hawaiian life. This is a significant improvement on its original collection, which consisted merely of a few shelves of books. Along with Princess Bernice’s possessions, Queen Lili’uokalani herself donated personal papers to the museum including scientific papers and royal genealogical documents.

With so many impressive collections and exhibitions, it’s no wonder the Bishop Museum has become a favorite for visitors to Honolulu as well as Natives who have lived here all their lives. There’s always something new to see at the Bishop, and if you’re brave enough, perhaps something darker.

The most infamous ghost story circulating about the Bishop museum is undoubtedly that of the murderous spirit still rumored to lurk within its halls. According to the story, the museum decided to dedicate an exhibit to the heiau, or elaborate Hawaiian temples built to honor ancient spirits. Legend has it that these spirits forbid mortals from taking anything from the heiau. To avoid displeasing them, the staff opted to create a replica of the temple inside the museum rather than taking apart an existing one.

But one unlucky exhibit designer at the Bishop was sadly unaware of this fact. Wanting to make the replica as convincing as possible, the young designer traveled to the site of the nearest heiau, hoping to gain some inspiration. Unfortunately for him, he came back with more than just ideas. While exploring the site, the designer removed a handful of lava rocks he found scattered around the temple’s stone steps — and according to some, an angry spirit.

That same night, the young man’s mother had a terrible dream. In her dream, her son suffered a fatal accident at work. The woman woke with a start and immediately called her son, begging him to stay home from work the next day. Annoyed, he told her to go back to bed and stop worrying so much.

The next morning, the man woke up and got ready to leave for work, but his mother’s warning still echoed in his mind. He brushed it off, wanting to show off the lava rocks he’d found at the temple to his coworkers. As soon as he arrived, he took the rocks from his bag and began arranging them in place inside the replica. When he was done, his boss ordered him to finish installing another piece of the replica suspended from the museum’s ceiling. He obliged and began to climb to the top of a tall ladder in the center of the room. Just as he reached the uppermost rung, he slipped and fell to his death. Ironically, his body landed directly on the pile of lava rocks he had arranged just moments before.

Following his mysterious death, his coworkers removed the lava rocks and brought them back to the temple. Yet even after enacting its vengeance on the unwitting young man, the angry spirit of the heiau is rumored to hang around the museum. The remaining employees have since reported feeling a menacing presence in the room displaying the temple replica, even long after the rocks were removed. The room also holds a reputation as the coldest in the whole building, and tour guides at the museum even warn visitors to put on any sweaters or jackets they have with them before entering. Many of these same visitors report the strange, inexplicable feeling of being watched. You could say the Bishop upholds the “look but don’t touch” museum rule more strongly than most!

But if vengeful Hawaiian spirits aren’t enough to scare you, never fear, they’re far from the only case of paranormal activity reported over the years. Night staff working late cleaning the very haunted Bishop museum have described strange, unexplained happenings after hours.

One report in particular is enough to send chills up the spine. One night, a janitor was busy mopping the floor, minding his own business, when he heard the sound of dense, heavy breathing. Confused, he looked up from his mopping and out into the darkened museum corridor. There appeared to be no one there. Unable to identify the sound, the janitor went back to his work. Almost as soon as he picked up his mop, he heard the sound again, but this time it was right behind him! He quickly spun around, brandishing the mop above his head like a weapon. But there was no one there. Thoroughly spooked, the janitor was ready to call it a night; the floor was clean enough. He began to gather up his things, yet just as he began doing so, he spotted a strange, shadowy figure standing in the corner of the darkened room. Not wanting to hang around and find out who or what was in the museum with him, the janitor fled from the building, his mop clattering on the floor behind him. He quit the next morning.

Similar to the Waikiki Prince Hotel, the namesake of the Bishop Museum is said to hang around to make sure things run smoothly. The ghostly apparition of Princess Bernice Bishop has been spotted a number of times in and around the museum, usually standing in corners where the light doesn’t quite reach, admiring a portrait or a rare specimen of insect. She is most commonly seen right before the museum opens and just before it closes. Employees can usually pick her out her immediately, as she is dressed in a full-length late 19th-century crown and the jewels of a princess.

Unlike some of the other spirits roaming the halls of her museum, the ghost of Bernice has so far proved benevolent, and many who have spotted her report feeling that they had no reason to be afraid in her presence.

The historic district of Kalihi is ripe with culture and serves as a thriving, breathing testament to the island’s past. If Kalihi is the crown of Hawaii, then the Bishop Museum is its crown jewel. The vast, stunning collection of books and historical records, impressive array of Polynesian artifacts, and dedicated efforts to preserve Hawaiian history and culture all make this historic museum a must-see. Along with the physical relics of Hawaii’s rich history, the spectral presence of Hawaiian royalty, as well as that of ancient vengeful spirits, make the Bishop an essential stop on any paranormal enthusiast’s Honolulu tour. Just be sure to look, don’t touch. 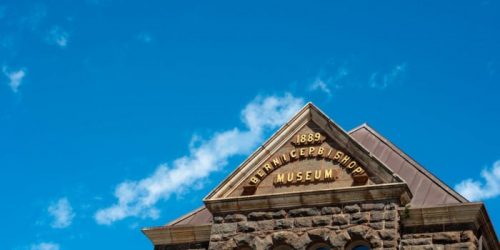